I want to be cremated. I don't want my ashes scattered in water or saved in a vase. 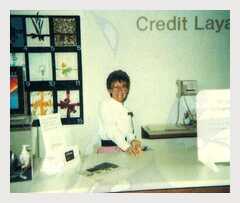 Sharon considers herself an introvert, but gets along with most people, and would like to be more outgoing.

Is good at decorating her apartment doors. Everyone enjoys looking at her doors. Loves to bake and was a good cook.

Love to read and knit. Knitted Afghans for all the grandkids so they would have something to remember her by.

Sunbathing - "If I can't lay out in the sun, I might as well be dead!"

Sharon Gertrude Bechteler Orth was welcomed into the world by her mother, Gertrude Harriet Bechteler in Milwaukee, Wisconsin on November 16, 1935. She was an only child and grew up with her maternal grandparents, John Adam and Clara Senner Bechteler, at 2211 W. Lisbon Ave. in Milwaukee, Wisconsin. Sharon lived with them until her marriage to Philip John Orth, Jr. at age 20 on February 18, 1956. She did not know who her father was, but thought it might be a man named Larry Thede. She has only seen one photo of him.

Sharon attended Brown Elementary School and West Division High School, both in Milwaukee. After graduating from high school she did secretarial work, and then worked part time as a church secretary and at J.C. Penney’s both taking catalog phone orders and as a clerk at the catalog pick up desk during her marriage and child-raising years.

After her divorce in 1987, Sharon did factory work, mostly second and third shifts, which is what she loved the most. She worked at Grand Manor Designs in Houston, Texas and at Lithonia Lighting Airborne Express in the Atlanta area until retiring. Now she is a “Lady of Leisure”.

Sharon was an only child, but was blessed to have three girl cousins who were very close to her in age. Their names were Jackie, Judy, and Jerianne Hertz. They were her Aunt Mildred’s daughters. Aunt Millie was the only sibling to her mother, Gertrude. The family lived in Watertown, WI, but came to visit their grandparents in Milwaukee very often, so they spent a lot of time together and Sharon considered them to be like her sisters, and it was very memorable. They were always together on holidays, and she especially remembers Easter as being very special. In her own words, “If it wouldn’t have been for them, I would have been really alone and lonely.” Jackie and Sharon were the same age, and she was the Maid of Honor on her wedding day to Phil.

Sharon met her husband, Philip, through a neighbor, Dennis Klibowitz. Philip was the oldest of six brothers and when she went over to eat a meal at their home, they ate at a very long table and his youngest brother would stare at every mouthful of food she ate. She was the only girl the brothers had ever brought home to eat so far. Philip had an old 1942 Chevy car with a rumble seat. It was “horrible” and she remembers that the whole bottom was out of it and her feet hung out. She remembers thinking that this was something to remember.

Philip and Sharon dated for about two years and had a large wedding celebration at The Arbors which included nice food and dancing, after a ceremony at Cross Lutheran Church. It was just perfect for them! They went on an overnight honeymoon, but Philip got sick so they weren’t able to do much. She thinks he missed his mother as he was very attached to her.

When they first got married they lived above a tavern in a third floor apartment.  Michelle (1956) was born during this time. Next they moved to a house on Juneau Avenue where their son Philip III (1958) was born. They rented several more flats where Scott (1959) and Christopher (1963) came along, until purchasing their home on 2211 South 73rd Street in West Allis, WI., where they continued raising their family, including daughter Rachel (1970) for many years until moving to Houston, TX in the mid 1980’s. Philip was offered a job managing an RV park in Baymont, TX. which he did for several years. Rachel moved to Texas with them.

Phil and Sharon had many good times and memories together in their 31 years of marriage. This included many vacations and time spent with their five children. They went to the movies quite often, and enjoyed going out to dinner. They also joined a camping club that included members from their church, St. Paul’s Lutheran on Lincoln Ave. They spent many weekends camping, both in a tent, and later on in a pop up camper. It was a wonderful time and the children really liked to go too. They had fun playing cards, swimming, and recreating with many friends. Camping enabled the family to go to more places than otherwise would have been possible. For instance, when the three oldest children were in high school they drove to Florida two times and camped at the Disney Campground. Another trip was to Hannibal, MO and to the Badlands of SD. She went on a cruise to Alaska in 2014 and a cruise to the Caribbean in 2018 which she really enjoyed. The only other place she might still like to see is Hawaii. Her very favorite vacations have always been to the beach, as sunbathing is her favorite thing to do in the world, and always has been.

The very best time Sharon ever had in her life was when she and Phil took Square Dance lessons and joined a local club. They danced often and made so many wonderful friends! They even socialized with these friends in other ways and traveled to dance events around the region and the US. Sharon stayed up until two or three o’clock in the morning sewing her dance outfits. They even danced at Competition level for a time. They enjoyed it all so much that she still thinks about it fondly now and would go back to square dancing again, but you need a partner and she doesn’t have one.

The Orth family also felt religious training was of high importance. All of their children attended St. Paul’s Lutheran School through eighth grade and the two oldest also attended Martin Luther High School. The whole family was very active in the church and participated in many ways. They always went to church on Christmas Eve because the kids were in the program, and then they always had company over to celebrate. On Christmas Day, gifts were opened from Santa and then lunch was at Grandma Orth’s house and then dinner at Grandma Gertie’s. One tradition that was established that is still practiced by her grands and great-grands is celebrating St. Nick’s Eve by hanging stockings on Dec. 6. This is an old German tradition. Sharon now attends a non-denominational church.

Philip was a good provider and the family never wanted for anything. He often worked evenings, so she had the kids at mealtimes often by herself. She felt it was important that they try different foods and eat what was on their plate, which led to them not being picky eaters. Her husband liked a variety of gourmet food, so she would pour over her cookbooks to find new recipes to make. She chuckles now about how the kids would try to hide their food and feed it to the dog under the table when they didn’t like it. Sharon LOVED to bake and was considered an excellent baker by the whole family. She enjoyed that much more than cooking, although she did make homemade meals for the family almost every day. Folks didn’t eat out so much in the old days. At Christmastime she made at least 20 different kinds of cookies!

Sharon thinks that all of her children turned out pretty good. Even though all of them didn’t go to college, they all have good jobs and are successful. She feels like they are all very good parents as well to her 16 grandchildren and her 17 great-grandchildren. Since they are spread out in different states, she doesn’t see them very often and wishes that she could see them more. Her most trying times are when she can’t get ahold of one of her children and she worries about how they are and if something might be wrong. She just likes to hear their voices and know that they are all okay. She doesn’t have any specific advice for them since they are doing wonderful without it.

Sharon moved to the south side of Atlanta in the mid 1990’s after her divorce and the factory where she was employed closed. Her oldest daughter had moved there from Wisconsin and she thought that might be a good place to relocate and find work. She lived in a few apartments, but then she purchased a mobile home and lived in it for 14 years. It was her favorite place and she still misses it. Now she is in a senior apartment which is fine.

Sharon has been pretty happy with her life. Her most influential person was her grandpa John, who was the most wonderful man who never had an enemy.  Sharon’s favorite color is blue and she enjoys reading, going to parades (which she misses living in the South), sunbathing, knitting, helping others in need, decorating her apartment door, and watching movies. She is a movie buff!  Sharon feels so blessed to have had excellent health all of her life. She used to love to dance and play volleyball in her younger days, otherwise she does not like sports at all.

Sharon   is an introvert, but gets along with most people, and would like to be more outgoing. Sharon would like to be remembered as being like her mother because her children all talk about Grandma Gertie so fondly. She was easy going, and they just loved her.

Her Career in Her Own Words

To view data marked as Private, you must create and sign in to your free account AND be invited to view the data by the page's author