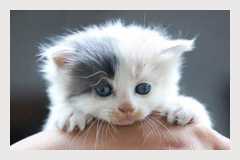 When I was growing up, we always had cats in the family. I was about five years old when my first pet cat arrived. I grew up in the north of England, in very traditional brick-built housing, and we still had coalhouses in the back yards. A neighbour’s cat had had a litter of kittens, and needed homes for the final two. My older sister took me to choose one, and I fell in love with the little boy. He was mainly white (though it was hard to tell, because of the coal dust), with a black tail and a small black patch over one ear. Very originally, I called him Snowy.

Once we got him home, the poor little thing was so scared at his new environment that he hid under our old-fashioned sideboard. I learned that day about the power of tuna to encourage a cat to a) trust you and b) come out from his or her hiding place…

He was a very good-natured cat, and surprisingly clever: he didn’t stray far but he liked to lie outside in the sun in the back yard. When he wanted to come in, he quickly learned he could sit on the outside window sill and rattle the iron latch on the back door.

Snowy was with me all through elementary school, through the ups and downs of childhood and for the first two years at senior school. He always seemed to know if I was a little bit down or worried.

He was very trusting of strangers and although not a lap cat, he loved to be cosy and snug. Dad used to get slightly cross, and then just laugh. Whenever Dad had spread out the newspaper to settle down to read, Snowy would decide, obviously, that the warmest place was right in the middle of the paper. When winter came, I would just follow Snowy to find the coziest place in the house.

When he passed away, at the age of thirteen, a very respectable age for a cat in those days, I cried. A lot. Until my older sister helped me remember his shyness when he first came to us; what a nice-natured cat he had been; how he had loved tuna and a little bite of cod whenever we had fish and chips; and for dessert he’d even enjoyed a little bit of sponge cake. She reminded me how he had enjoyed chasing wool and ribbons along the floor, wiggling his hind quarters until it was time to pounce on the unsuspecting fabric.

I’ve had other pets since, but he continues to occupy a very special space in my heart, and all these years later I can still hear him rattling the latch to come in.

He was such a good-natured cat, very quiet and patient and very sociable. I knew my first boyfriend was one of the good guys when Snowy took to him almost immediately, settling down on his knee and curling up to sleep. He used to love it when we came in with shopping bags - Snowy knew it was always time to investigate, there was almost certainly a treat or two in there for him.

He wasn't a lap cat exactly, but he loved to curl up somewhere warm and sleep. He liked newspapers, especially if they were spread out on the table or the floor - and especially if someone was trying to read them. And his favourite trick was to rattle the latch of the back door to say he wanted to be let in.

He was a large white cat, with a little black patch over one ear, and a long black tail, usually standing straight up in the air.

Snowy had very few health issues; even towards the end of his days, he was still relatively healthy, apart from the occasional cat cold.

Paula - his owner. Snowy loved her because she played with him, fed him, cuddled him, and stroked him.

Evelyn - Paula's mom. Snowy loved her because she helped Paula learn how to look after him properly.

Chas - Paula's dad. Snowy loved him because he let him read the newspaper...

Uncle Victor - Snowy loved him because he always had exciting treats in his bags for Snowy.